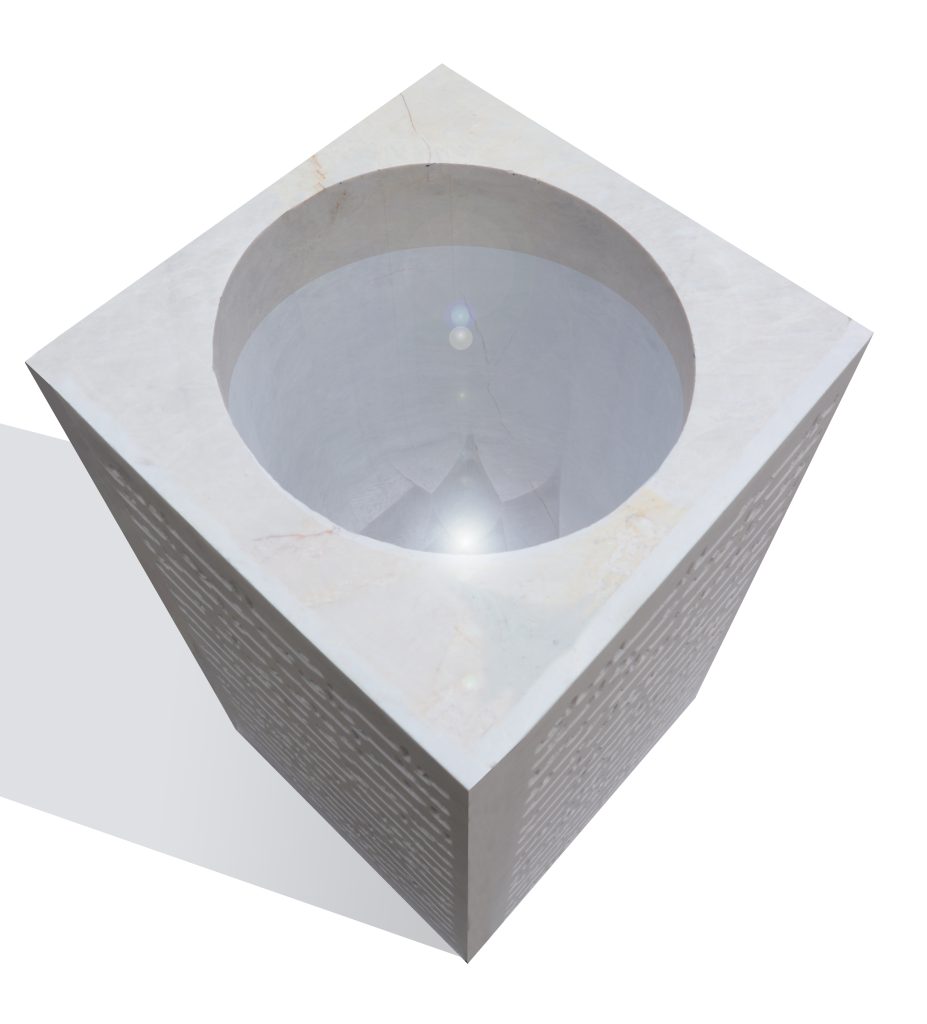 The Fountain of Sun

The Fountain of Sun, as the name suggests, is an artwork in praise of the sun. Stone cisterns are symbolic objects which represent the connection of water and light. These stone cisterns has been in ancient Mithraic temples, Various religions of Anahita (the essence of water) and then found their ways to the Christian churches and finally in Islamic architecture. These Stone cisterns or Sangabs, were usually made in the form of a grail.

In my new work I went for a standing rectangular cube and inside it I carved an inverted dome. Muqarnas that is featured in the dome is carved based on the patterns of the Sien mosque of Isfahan. And an empty space was created in the middle of it to take the place of the symbolic role of the sun.

The Fountain of Sun, as the name suggests, is an artwork in praise of the sun. Stone cisterns are symbolic objects which represent the connection of water and light. These stone cisterns has been in ancient Mithraic temples, Various religions of Anahita (the essence of water) and then found their ways to the Christian churches and finally in Islamic architecture. These Stone cisterns or Sangabs, were usually made in the form of a holly water font.

In English, the container used to store holy water is called “font”. “Font” at the same time means a collection of letters and also means a fountain.

Stone cisterns are part of Iran’s forgotten heritage. In despite of this amnesia, their presence is mentioned here and there in the most famous works of Persian architecture. Iran’s cisterns have never been practical tools. They have always had a symbolic function. These cisterns are small monuments of humanity in praise of the sun. What has been reconstructed in this piece also reminiscent of ancient Persian hymns in praise of the Sun. Persians watched the sun in the water and they dedicate their hymns to this image of the sun. The muqarnas inside this cistern has now built an upside-down dome, the hole at the end of which is like a symbol of the sun. It is as if you are looking down a well which shows you the other side of the earth. Although it is night here, the sun is shining on the other side of the earth.

The sun is perhaps the most important element in mythology around the world. In the ancient mythology of Iran, the sun  has a central role. The title of the sun in the ancient Iranian hymns (Avesta) is “The Eternal fast-horse”. It is as if the sun comes out from the top of the highest mountain of the Iran plateau every day riding on her golden chariot and her horses pass her through the dome of the sky.

I think I was six years old. One day, when my parents were not at home, I was looking for batteries for a toy car. Finally, I went to my father’s closet. A little later, I found a toy robot in that closet; A robot that I had seen many times on TV.

It was almost a big robot. It was black and red. I put it on the floor and turned it on. The robot started walking and then its belly lit up and inside it showed not so clear slides of space.

Right up until this moment when I am writing this, I imagined that the robot was showing images of planets on its stomach, and most importantly I remembered that the image of the planet Saturn was among the slides. But now that I watched the videos related to this robot, I know that it did not show the image of Saturn, but the name of the robot was “Saturn Robot”.

I thought to myself, what is this robot doing in my father’s closet? Then I imagined that maybe they bought it for me and then they want to give it to me as a gift on a suitable occasion; So I must not tell anyone that I saw it. But from that day on, I waited for my parents to leave the house to go to the Saturn robot. Maybe a month later, one day when I went to my father’s closet, the robot was no longer there. Not only did I never see that robot again, I never understood why that toy was hidden in my father’s closet all that time. I never had a chance to ask my parents this. A child’s logic is different from an adult’s. In my adult days, when I remembered this childhood memory, my father’s memory was damaged due to a stroke.

When I decided to put a rotating slide underwater instead of the sun, I remembered that I was making up for not having that robot toy. That’s why I went to an engineer to design this simple electromechanical robot for me. 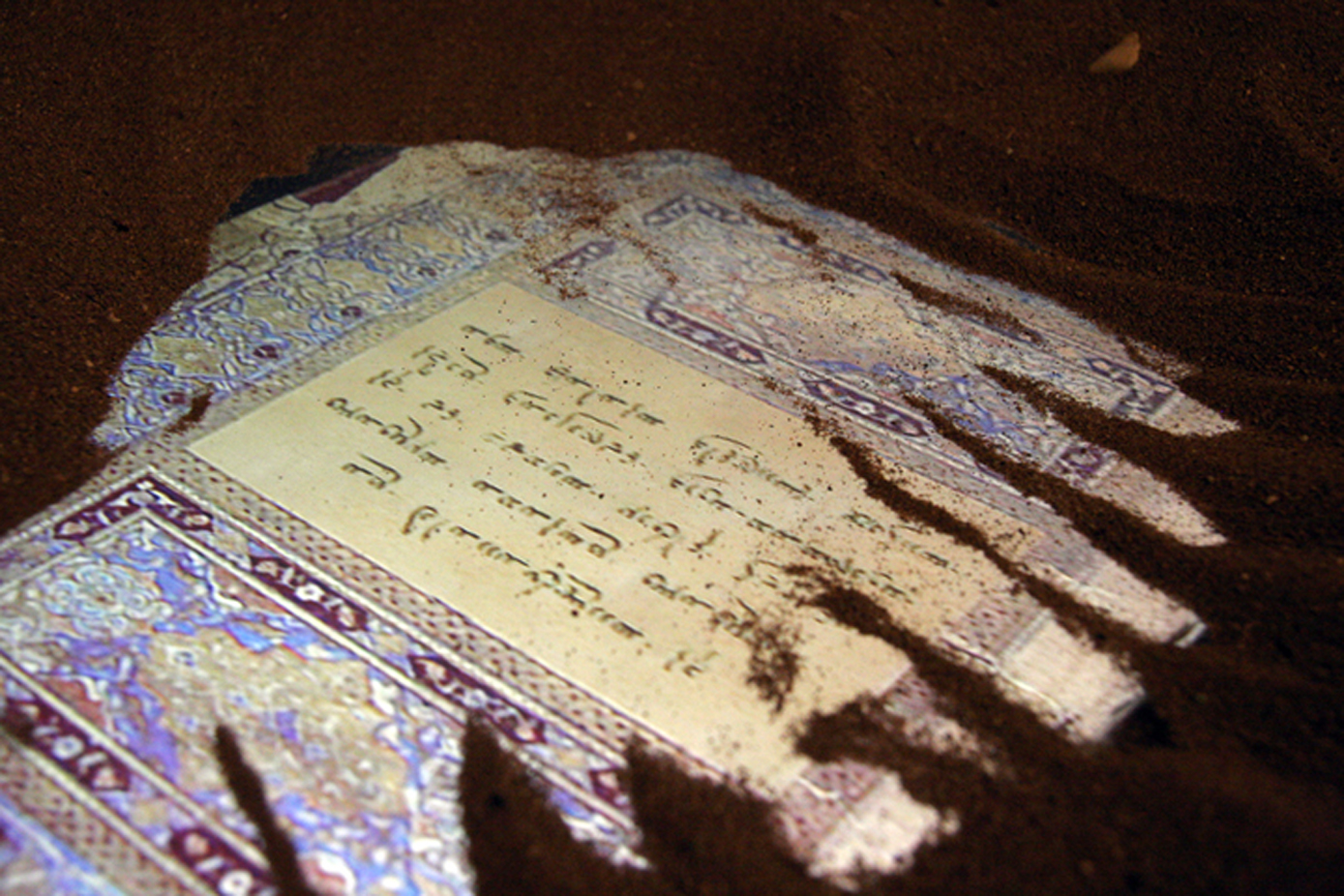